Some of the experiments that the Japanese undertook on their Chinese victims at Unit 731 make the experiments of Josef Mengele look relatively mundane in comparison, and yet there were no trials of those involved following the surrender of the Japanese in 1945. Why were they allowed to escape punishment?  These monsters were provided immunity from punishment by authorities in exchange for the data that had been collected, and then the evidence of their crimes was covered up by these same authorities.


Japanese Imperial Military Unit 731: The First Direct Evidence of Exposure of Human Anatomy
[The 4th Media editor’s note: This article is about another newly-revealed case of the “numerous war crimes” which haven’t been yet fully-revealed, -admitted, and -compensated by the post-war Japanese governments of their imperial ancestors’ heinous “War Crimes and Crimes against Humanity,” committed mostly in China, Korea and some other Asian nations, before and during the WW II.] … by a notorious division of the Imperial Army called Unit 731

[Wenhui Reuters on the eve of the War Victory 68 anniversary, China’s “731” issue released to the outside world expert on Japanese invaders 731 anatomical main contents of the report, the experts said that this year the Japanese army to prove direct evidence of human anatomy.]

According to Xinhua reports, in November 2011, 731 Harbin Academy of Social Sciences Research Center for the International Yang Yanjun access to the United States Library of Congress of the United States of Japanese germ warfare decrypt files and found three anatomical reports, one of which is the plague bacteria Report “Q report.”
“Q Report” was 731 in 1943 and agricultural security area Changchun plague infection autopsy report, the main recording of the heart, lungs, and other organs of infected tonsils path and the degree of infection and other information.
Yang Yanjun introduction, “Q Report” documented the anatomy of cases totaling 57 cases, of which agricultural security area in 39 cases, Changchun 18 cases, anatomical case of basic data, including name (English uppercase letter code), age, gender, the process of days, form of the disease, infection methods.
“Q Report” in July 1948 submitted to the U.S. Army, a total of 744, divided into four parts. 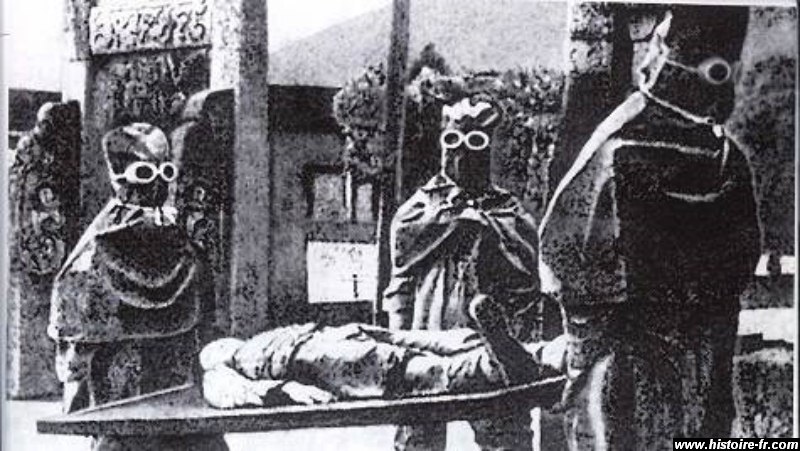 The first part is the heart and lung infection data, the second part is mainly the tonsils, pharynx, bronchi, stomach, intestines, spleen and other diseases and lesions record, the third part of the disease process is mainly lymph nodes and kidneys, pancreas anatomy data, the fourth part is the adrenal gland, thyroid, thymus, testis, pituitary anatomical data.
“Overall, each case is examined microscopically after a comprehensive analysis of cases of pathology and disease trends, and analyze the reasons for its formation and infection ratio, which is a more detailed anatomical report.” Yang Yanjun said.

Through the “Q Report” interpretation, Yang Yanjun that 731 is not only engaged in biological weapons research and testing, but also in medicine and research carried out on pathological anatomy, its purpose is to serve the Japanese invasion of China, entirely contrary to medical ethics and humanitarian spirit.
Yang Yanjun said, “Q Report” anatomical organ of the whole, the detailed data that can identify 731 as a critical medical data, to enable them to understand the extent of plague infection and organ lesions details for 731 bacteriological weapons research , the effect of bacterial infection, bacteria dose selection provides an important reference.
“‘Q Report” revealed further 731 as “epidemic” in the name of the actual conduct of the study of bacterial infection historical facts, but also the 731 during the war of aggression against direct evidence of human anatomy. “Yang Yanjun said. [For our readers’ sake, The 4th Media presents the following document, prepared by http://www.japan-101.com/history/unit_731.htm, which provides a little more historical backgrounds of the above-posted article on the said crime committed by Japanese imperial army.]

Unit 731 was a secret military medical unit of the Imperial Japanese Army that researched biological warfare and other topics through human experimentation during the Sino-Japanese War (1937-1945) and World War II era. The unit was disguised as a water purification unit. It was based in Pingfan, near the city of Harbin in northeastern China, the region which was sometimes referred to as Manchuria or Manchukuo.

In 1932, Ishii and his men built the Zhoghma Fortress, a prison on the outskirts of Harbin. In 1935 a jailbreak forced Ishii to shut down Zhoghma Fortress. Ishii moved closer to Harbin at Pingfang to set up a new facility.

The 731 complex covers six square kilometers and consists of more than 150 buildings. The facilities were very well designed making it hard to destroy them. Some of 731’s satellite facilities still remain and are open to tourists.

Ishii wanted to use biological weapons in the Pacific conflict since May 1944, but his attempts were repeatedly foiled by poor planning, and Allied intervention. When it was clear that the war would soon end, Ishii destroyed the facilities, and told his men “to take the secret to the grave.” The United States believed that the research data was valuable because the US and its allies would never conduct this type of human experimentation. Also, the US did not want any other nation, particularly Communist Russia, to acquire data on biological weapons. Therefore, in exchange for the data, the United States did not charge the officers of Unit 731 with war crimes.
Many former members of Unit 731 have become part of the Japanese medical establishment. Dr Masaji Kitano led Japan’s largest pharmaceutical company, the Green Cross. Others have headed medical schools or worked for the Japanese health ministry.

In 1997, 180 Chinese, either victims or the family of victims of Unit 731, sued the Japanese government for a full disclosure, apology and compensation.
In August 2002, the Tokyo District Court acknowledged the existence of Unit 731 and its biological warfare activities, but ruled that all compensation issues were settled by the Joint Communique of the Government of Japan and the Government of the People’s Republic of China of September 29, 1972.

Unit 731 activities are denied by right-wing nationalist Japanese historians, who say they are fabrications by Chinese propaganda. References to Unit 731 are omitted from many Japanese history textbooks. Some see this as evidence that, in modern Japan, revisionist history is part of the mainstream. Japan is at fault for refusing to accept responsibility for the crimes of its past. Despite this it should be remembered that Japan at the start of the 21st Century is a stable democracy and, in other respects fairly liberal.

Chinese movie Black sun 731 (Man behind the sun) is a somewhat snuff film on the atrocities committed by the Japanese.